Today in our church service at Daybreak Community Church we introduced a new sermon series entitled â€œConsequences.â€ It is a journey through the book of Lamentations. The book of Lamentations is not a warning not to sin, but it tells us how to deal with the consequences of our sin once they lay upon us as â€œa yoke.â€ It was written by a person (I believe it to be Jeremiah) who had gone though â€œthe Day of the Lord,â€ and lived to write about it.

We discussed how Godâ€™s people became aware of their condition and how it was brought upon them by their sin. We also said that they were remembering what life as like when they had the favor of God and His blessings) which were now distant objects in their rear view mirrors. How many times have we ever asked the question, “Why did I do that?” So in Lamentations 1 they begin to cry out to God and recognize their condition was brought on by their own rebelliousness and that their only hope of a different life was God and his grace poured out upon them. 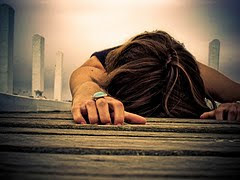 Everyone has sinned in such a way that they have some consequence that they now live with. Sometimes this consequence is more readily visible than others. Some may not be able to readily hide their consequence. For others, they may dream horrible dreams, have panic attacks, or some other condition brought on because of the consequence they carry.

We discussed how Godâ€™s people were broken over their sin. In Lamentations 1:20 they say, â€œLook, O Lord, for I am in distress;â€¨my stomach churns;â€¨my heart is wrung within me,â€¨because I have been very rebellious.â€

So what does it mean to be broken over our sin?

1. To stop playing games with God. There are so many games that people play with God. False repentance, emotional outcries that are void of any heart change, asking for forgiveness knowing that in a matter of hours the sin will be repeated, etcâ€¦ But in this passage the judgment has fallen upon them and they are done with playing games. Read the passage and see if there is any hint of being â€œreligious.â€ They are far from playing religious games with God, they desperately want the weight of their sin to be lifted and for something to be done about the condition they find their lives in.

2. They are crying out to God and have stopped trying to get help from other places. In chapter one they go to their false gods (called â€œloversâ€) and those false gods rejected them. They have fallen so far that no one around them respects them or in any way wants to help them. The â€œgodsâ€ they had left God for, now reject them. Their only hope is for God to have mercy upon them. We are truly broken over our sin when we realize that there is no help anywhere but in God alone.

3. They acknowledge that their hearts are broken over their sin, how they have grieved God and now cry out for His mercy. In the story of Jacob in Genesis 32:22 ff helps us to better understand being broken over our sin. (go ahead read it). Because of this encounter with God, Jacob would always walk with a limp for the rest of his life. Every step would remind him of how he had seen God face-to-face and God had spared his life.

This handicap would always remind him, with every step he took, of his rebellion and Godâ€™s grace. Jacob had broken his life to pieces â€“ he betrayed his father, his brother, and left his mother. He had several wives and they hated each other. His life was a mess. So God meets him in the desert, and wrestles with him.

Jacob recognizes that God has met him there, so he refuses to let God go, until he blesses him. Jacobâ€™s life forever changes in that all night wrestling match because he was broken. Do you realize how you have broken your life to pieces? (We all have, itâ€™s not a secret). Do you know that there is a gracious and loving God who loves you enough to break you?

Godâ€™s people in Lamentations one, when they say â€œI have been very rebelliousâ€ are agreeing with God over the condition of their sin and they are crying out for mercy and grace from God. They are not playing game (asking for forgiveness knowing in a few moments they would do it again) â€“ instead they were broken over what they had done, and were pleading with God for His grace. 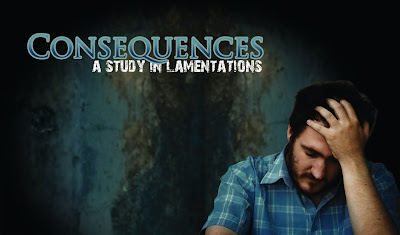