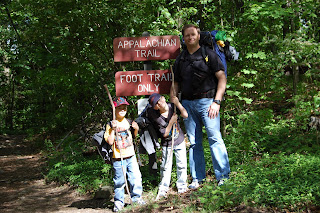 I just got back from our first camping trip. Joshua, Caleb and I went to Gathland Park where the Appalachian Trail cuts it in half. Kimberly drove us and dropped us off. The first thing I asked them before we hit the trail was do you have to go to the bathroom (since there was a bathroom right there!) they both said no, but guess what they said about five minutes into our hike?

I packed the boyâ€™s pack â€“ hereâ€™s what was in the bag:
A sleeping bag,
A nalgene bottle full of water,
A metal cup,
A MRE meal,
A whistle, small knife, and a flashlight (all connected together)
I had everything else.

When I put the pack on both of them, they just about fell over backwards. I really didnâ€™t think it would be that heavy for them. So not only did they want to stop and go to the bathroom, they also just wanted to stop altogether. We made it maybe a quarter of a mile, and stopped at a designated camping area.

We set up camp, gathered fire wood, and cooked dinner (Chili Mac). I bought one of those freeze dried meals and it was pretty good (I had the MREs for backup). Later on we did the whole marshmallow thing, and they loved to cook them but had no desire to eat them. So by the end I was feeling pretty sick of marshmallows. As the shadows grew longer, The boys began to slow down.

While it was 8pm it was still daylight, but I encouraged the boys to go ahead and go to bed. I used my air mattress as a seat and sat by the fire. It took them about thirty minutes to finally go to sleep and I just sat by the fire for about an hour. I am looking forward to doing that again.

It was when I decided to call it a night that I discovered something new. The tent was pitched on a slight (ok relatively steep) incline. I have a nice air mattress but when combined with a nylon sleeping bag and incline it equals a dry slip and slide. So the whole night I fought gravity â€“ three guesses who won.

In the morning we awoke to about 45 degree brisk air (but clear and dry). We cooked some oatmeal, and had a granola bar for breakfast. Up until this point things had gone really smooth. But Joshua did not want anything I had to eat, and he was cold. Even though I built another fire, he was tired, cranky, hungry and cold, and for a five year old this equals major meltdown.

We packed up and started back. The only problem was that Kimberly wasnâ€™t due to pick us up until after 9am and it was about 7:30am. We hiked backed and used that bathroom we neglected at our arrival, dropped the packs, and ran around in the large field by the park (in the warm sun). When Kimberly picked us up we all had smiles and were happy to be going home.

Later, I asked Caleb what he liked best about our camping trip and he said â€œrunning around in the field.â€ Sometimes I forget that my children just want to play with dad.