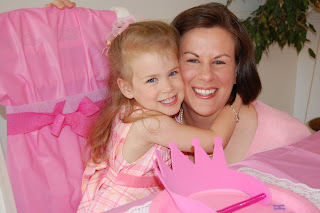 Monday was H-G’s fourth birthday and she has been looking forward to it, and asking questions about it for months. The theme this year was “princess party” and it was definitely that. There were about six girls who came wearing princess attire. There were tiaras, foe mink shoulder throws, jewelry galore, and of course fancy dresses.

I was the designated butler who greeted the guests, took drink orders (pink lemonade or banana tangerine), served the tea, and waited the table. I was the only “boy” allowed. The party began by girls being allowed to add to their outfit from a tote full of accessories. They then made a foam crown and pasted various ornamentation on them. Then it was time for tea and sandwiches, followed by dessert. They discussed tea etiquette (like keeping your little finger up when drinking and blotting with your napkin, not swiping).

There were a couple of games and then they all put on play clothes and played in the backyard. I don’t think Hannah-Grace quit smiling the whole time.

The real star of the party was Kimberly. She went all out and planned the whole thing from start to finish. A couple of weeks ago I preached on the Proverbs 31 woman and during the whole party that was all I could think — This party is great, my daughter is extremely happy and it’s all because my wife put so much effort to make this special for her. She wore a formal dress, put up all kinds of decorations including a chair decoration for H-G that was made of a pink plastic table clothe and crepe paper, and prepared all the food. There were little sandwiches in the shapes of hearts. All I can is wow!

I will post some pictures from slide.com and if their ads are there just click on the x at the top right corner to see the pictures of the party.