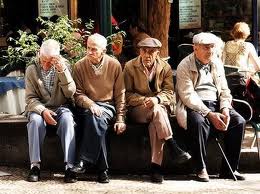 As a young boy I have fond memories of spending many Friday nights with my grandparents. They had a tradition that stretched out over several decades of leaving their quaint farm home and driving â€œto town.â€ Their destination was the Opelika Mall near Auburn, Alabama (where I would eventually go to college, but I donâ€™t think this family tradition impacted that decision in any way). My grandmother, who I affectionately call Mamama (yes, there is a story behind this nickname), would stroll through JC Penny, Sears, and the like until she had purchased the perfect Christmas, birthday, etc. present. This process of elimination would take several hours.

While she would shop my grandfather would sit on a bench in the middle of the mall. He would be joined there by other men (not always elderly, I am a case in point) who would carry out a manly tradition that in our background check, National Security, 9-11, restraining order, day may sound a little shocking. But these men would (and I suppose this tradition still is alive today) â€œpeople watch.â€

This involves observing people as they walk through, hang out, run errands, and shop in the mall or other public place. All kinds of people doing all kinds of things seemed to fascinate the retired gas company worker, dairy farm owner, and WWII veteran.Â  Occasionally one of these men would lean over to the other men there, make a comment, and the whole group would laugh. These men didnâ€™t know each other and rarely even talked to each other, other than these cryptic softly spoken comments. They did not make comments about women, but teens with multicolored spiked hair, or an untethered wild child would almost always get some kind of a reaction from my grandfather. The â€œweirdoâ€ who spoke to himself, did things that everyone else does in private in public, or was â€œjust not right in the headâ€ typically did not get laughs but frowns and looks of concern.

As a boy observing this behavior and even sitting down and doing it myself has taught me something very important:

1. Â Observation is an art form. You donâ€™t stare at people. You look in their general direction as if looking at something behind them, but while they arenâ€™t looking you take in all the details of the person. But if you look close enough for long enough the details of their lives pop out like some dialogue in a Sherlock Holmes novel. Some are better observers than others. But everyone has something to tell just in how they walk through the mall.

2. Â People watchers enjoy variety. If everyone were like them, these elderly men would have nothing to make comments about. The variety in life made their lives fun for a couple of hours on a Friday evening.

3. Â Storytelling. As I watched the people I would create a story for them in my mind. If it were a dating couple (and yes you can tell the difference between dating a married couples) I could look at the girl and then the boy and be able to tell you everything about their relationship. If it were a mother and child I would imagine what kind of house they lived in, what they ate, the car they drove, even what Christmas would have been like in their home â€“ from just a few seconds of watching them together.

Eventually, one by one the grey hairs would come to collect their husbands and the panel of antique observers would shrink down to the last one. My grandmother would say, â€œFletcher, are you ready?â€ and my grandfather would slowly stand and without a word walk back to the car and drive home. He would have a smile on his face as he remembered a comment made by the men, or a wildly dressed young person. In a weekâ€™s time the tradition would continue once more.