Dr. Daniel Povinelli, a behavioural scientist, in a documentary entitled Surviving ProgressÂ explains that up until recently the purpose of studying chimps was to look for similarities and show how they were similar to human beings. But his study has shown that the major difference between apes and humans is the human’s ability to ask “why.” Povinelli says, “Humans are probing for un-seen phenomenon to explain the observable.”

In a study with shapes where two identical shapes are given the test subject and they are asked to place them in a circle the same way; only one of the shapes is slightly askew on th 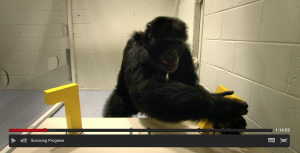 e bottom and won’t stay upright. The chimp will try again and again to put the shape upright and will eventually give up.

Whereas the human will try several times but will eventually turn the shape over, examine the bottom, or shake it, asking, “why won’t the shape sit up like the other shape?” His conclusion is that this is a major difference between humans and chimps — humans ask “why?” 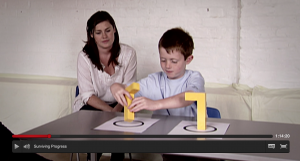 In our organizations it is so easy to look around and figure out what is expected of us or our organization. You may have been “putting the shape in the circle” for a long time. But you know something isn’t right. A chimp would just keep doing the same thing — again, and again, and again. But has intelligent leaders we have to stop and examine why this isn’t working. Why does the shape keep falling over? Why does the staff not communicate? Why do we have such a high turnover rate? Why do some leaders feel they can’t trust other leaders in the organization? Why . . . (insert problem here)?

If it is a human tendency to ask “why,” then why do some leaders stop askingÂ this fundamental question?

1. Not ready for the unpleasant answer orÂ willing to deal with difficult or “sticky” situations.

Most of the time, once you start asking this question, there will be a very obvious reason — and that reason may be a person. People are complicated and filled with emotions. If something isn’t working properly it will also, without question, involve change. If you put these two primal elements together (people and change) what you get is explosive.

Unlike in fifth grade when your volcano science project exploded as planned, this reaction ends in hurt feelings, people leaving your organization, or the end of friendships. If we don’t ask “why,” then we don’t have to deal with the fallout. If we don’t ask “why” we become like our chimp friends trying to do the same thing again and again expecting to get different results (which I believe is Einsteins’sÂ definition of insanity).

2. They are too busy asking the wrong question. 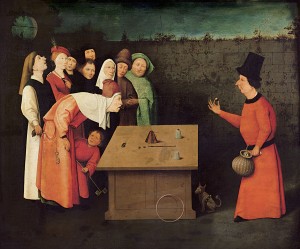 A fundamental skill in magic is one’s ability to misdirect. The magician will do something (waving a hand, flashing a bright handkerchief, etc.) that will encourage you to look in one direction while he uses his other hand to do “magic.” While you are looking one way, he is doing something the other way. If our attention is in the wrong direction, and we are focused on the wrong things it is more than likely because we are asking the wrong questions.

If, for example, you are asking “how” before you are asking “why” you will more often than not feel overwhelmed in the enormity of what needs to get done. The reason and explanation (the why)Â drives our hearts to do whatever needs to be done (the how). If we are not focused on the end goal, the vision, and the rationale of our great attempts, then we become consumed with the drudgery of day-to-day details. Why always has to come before how.Â When you are evaluating your situation, write the questions of your heart down and see if they are in the proper order.

3. They feel that the problem is not meant to be fixed.

Ok, so you tried a few times and you failed. You tried something and it was not supported, not funded, not liked . . .etc. Perhaps you are even now holding a scar from your service in the trenches. It is so easy for leaders to let problems go (especially if it’s not “that big a deal.”) You know that if that problem were fixed it would help the overall organization, but you have tried and it didn’t work the way you thought it would so you have essentially quit.

In your attitude, you are saying, “let someone else solve the problem.” If you are a leader then it’s your job. If you are in an organization that doesn’t want to listen to your ideas or value your inout then it is time to move on. Find a place where you can use your gift of asking “why,” and solving problems. Don’t allow your heart to simply accent to “this is how is has to be.” Keep pushing forward.

*This is part two of a two part series. Click here to read “The Power of Asking ‘Why’; Part One”