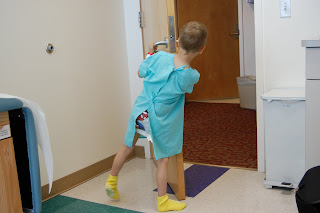 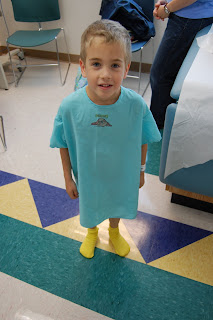 Kimberly and I have been putting off Caleb having surgery for over six months. Up until today he had a pediatric inguinal hydrocele that was repaired. If you are not aware of this condition, it is common among children and you con go to this link for more information.

Overall the day was stressful. We left the house at 10am and did not return until after 6:30pm. It took all day. The actual surgery only took about 50 minutes, but the preparation, waiting, and waiting for him to wake up afterwards took all day. They allowed us to watch as the anesthesiologist put him to sleep and we were asked to leave the room. It is very unnerving to know that they are going to cut on your child, and he is so small, and his parts on the inside are so small. But I guess the people at Childrenâ€™s Hospital in know what their doing. I took my rolling briefcase packed with stuff to do (even write my sermon) but I could do nothing other than dumbly flip through magazine that I really cared nothing about and wait. I just couldnâ€™t focus on anything else but what was being done in the other room to my son.

The doctor eventually came out and gave us a report, and the first thing out of his mouth was that he was fine. He even explained the surgery once again by writing with a pen on his scrubs pants. Somebody get that man a flip notepad.

Caleb eventually awoke, asked for a ice cream pop and some water and has not slowed down since. They insisted on wheeling him out in a wheelchair and Caleb insisted on pushing it himself with his arms â€“ no assistance please, thank you very much. His brother and sister met him at the van as we pulled up into the yard and they actually acted like they were concernbed for their brother’s well being.


He is not supposed to play outside (jumping, wrestling, bike riding, etcâ€¦). In other words, all the things that he loves to do are off limits for two weeks. This is going to be hard. He does have a war wound about one inch long about three inches above his groin area. Heâ€™s not supposed to touch it, especially not to scratch it. He hasnâ€™t complained of pain and is moving a little slower, other than that youâ€™d never know the difference.