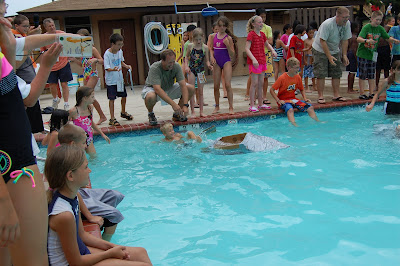 Tuesday’s highlight was the cardboard ship regatta. Churches working together built a ship out of duct tape, cardboard, and as much engineering as nine-years-olds can muster.

Caleb was chosen as the captain because of his mastery of the sea (not really it was because of his size), and I was elected to build it as close to the children’s drawings as possible. The boys talked into the night about what the design should be like — we ended up having to cut the front chain saw and and upper decks. 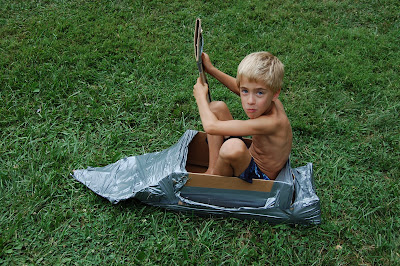 We were the fifth heat, so they had saved the fastest to the last (fastest to the bottom). We positioned our ship built in twenty minutes in the pool and on five-four-three-two-one I lowered him into the ship. After one mighty stroke it pitched forward throwing Caleb out and it sunk like a stone. Caleb being a master of the sea, grabbed it off the bottom and swam the length of the pool with it in tow.
The team cheered but needless to say there was no trophy given for our speed of design.
You can see more pictures at this link.