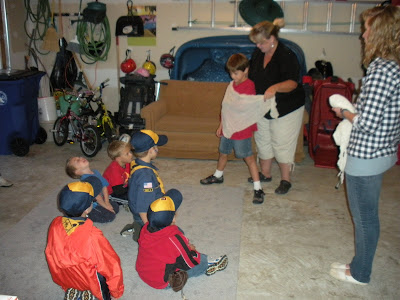 Tonight at Cub Scouts we had several interesting things happen. First Patti S. ,and her daughter EmmS., came out as a guest to teach the guys some beginners first aid. They learned how to deal with a cut finger, put on a sling for a broken arm, and check their/or anotherâ€™s pulse. They were unusually â€œactiveâ€ but I think they will remember the chocolate band aids for a long time.
We also, began having a â€œDenner.â€ The boys were introduced to the democratic system where they had the opportunity to vote for the boy in their den who should hold this leadership position. The Denner leads in the Pledge of Allegiance, is responsible for the den flag, carries himself â€œlike a leaderâ€ and gets to wear a sweet looking yellow cord on their shoulder. So, all the boys voted for themselves with two of the five writing â€œme.â€ We then had to discuss the importance of writing the name (and not â€œmeâ€) on the cards. After the revote one of the boys voted for someone other than himself and Caleb won. So Caleb won his first official election by a very narrow margin (1). He was sworn into office, where he pledged to serve with to the best of his ability. Joshua is not taking it very well. He has pointed out several things that Caleb is doing that he feels a â€œDennerâ€ shouldnâ€™t do, including not stepping down and letting his brother have the cool shoulder cord and carry the den flag.
Caleb has not stopped smiling and I think if I went up there to his room, he would be smiling in his sleep.