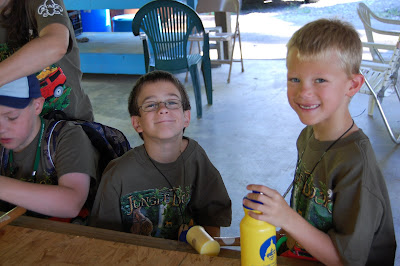 The opening of day four of Cub Scout Day Camp was like all the others, a flag ceremony, a thought for the day and announcements. On this day there was a call for rain and potential thunderstorms. We were given instructions to follow in the event there was lightening â€“ but I was not listening because several of the boys were wrestling, some were talking, and one was just having a rough morning and was crying for his mother. So I tried to comfort him, stop the wrestling, and maintain control of twenty eight year old boys. Needless to say, I completely missed the announcements â€“ besides right then it was hot and there was no cloud in the sky.

So letâ€™s back to the storm.

The boys began to put their arms around each other comforting and telling each other that it was going to be ok. I held the clipboard and was going through our group trying to make sure we had everyone and that no one was missing. We had everyone, and now we just had to wait out the storm. I was amazed at how the boys who came from different neighborhoods, schools, and walk of life put aside the childish fun making and joking â€“ and began to truly care for each other. There are always a few in any group that seem to just be mean toward others because of how they dress, look, act, etc. but not then. Every boy was scared and sought comfort from and helped out his buddy.

As a pastor I am supposed to tell you to read your Bible and seek comfort from Christ â€“ but we are also designed by God to need other people in our lives. God created â€œwomanâ€ for â€œmanâ€ in the Garden of Eden. The apostle Paul describes the church as a body â€“ and there is a need for all the parts to work together and to present. There are many more examples of Scripture of where men/mankind need friendships, family, and meaningful relationships.

3) Be a Good Friend.
It is amazing to me how eight-year-old will go all week playing with and being friends with another boys and never stop to ask their name. There have been several times where my children will go to an event and have a wonderful time, and make several friends. But when I ask them what the other childrenâ€™s names were, they will typically say, â€œI never asked.â€