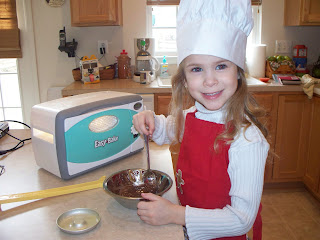 I posted a blog on 1-18-09 in which I mentioned in passing â€œHannah-Graceâ€™s Whopper,â€ and have since had several people ask me what was the whopper. So, by popular demand, here we go.

Several weeks back H-G got off the bus and instantly began to weep and cry and came into the house an emotional mess. I was upstairs working on some things and after the crying continued for quite some time, I came down to see what was the matter.

As I entered the kitchen Kim was sending H-G up to her room. Kimberly told me that she had gotten into trouble at school and even had to go to the principalâ€™s office for disobedience. Our kids know what will happen if they are disobedient to their teachers (or adults), so when I had all the details, I knew that she needed a pop. But as I was about to go up the stairs with a wooden spoon in my hand, Kimberly suggested that we call the teacher just to see what happened. So I called and left a message.

I then went upstairs to talk with H-G. She told me everything that Kimberly had told me â€“ exactly. She went across and area in the classroom she was not supposed to go. She disobeyed several times. The teacher took to the office where the principal talked to her. As she was telling me the story in great detail, she was crying.

As I finished up our talk the phone rang and it was H-Gâ€™s teacher. I asked her what happened, and I began to explain what I was told. The teacherâ€™s response was that H-G had an excellent day, that she was happy, and that her behavior was great. I didnâ€™t know what to say, so I thanked the teacher for calling and letting me know what didnâ€™t happen.

Why would H-G tell us a lie where she knew she would get into serious trouble? The bus ride from her school to our house in only a few minutes. Did she come up with this whole story in that amount of time? This is a first for us!