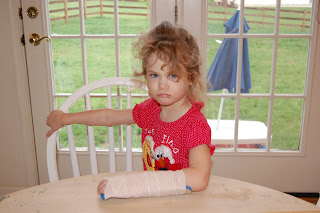 Hannah-Grace was introduced to the Frederick County Emergency Room the other night. All the children were going up to bed, and somehow going up the stairs H-G hurt her arm. My theory is that as she hung from my back jeans pockets she incurred a mild nursemaidâ€™s elbow sprain.

She immediately complained of pain in her arm, but I could not imagine from what. She didnâ€™t fall, and her brothers were no where around. But, she wouldnâ€™t let me touch her arm, and all she wanted to do was lay down and go to sleep â€“ she even wanted me to close her door (which is unusual). I waited for her to go to sleep and went into her room to look at the arm. Even asleep she was holding it and grimaced when I moved it.

So I told Kimberly what was going on, I carried her to the van and into the emergency room. We were blessed in that on a Monday night they were not very busy and we were in a room in about twenty minutes. She was very brave and after the nurse gave her some Motrin/Tylenol she began to be able to move it. They took x-rays and after about three hours she was given the â€œall clear.â€

In between doctors, nurses, and a trip to x-ray H-G and I prayed that her arm would get better and to be honest I had actually forgotten that we did. But by the end of the night H-G bent her arm and said, â€œLook daddy, Jesus made my arm better!â€ And I said, â€œYes He did, H-G, yes He did.â€

Itâ€™s been about a week now and the arm is as good as new. Oh, the cast is just for looks! She really didn’t need it, but the nurse thought it would help.