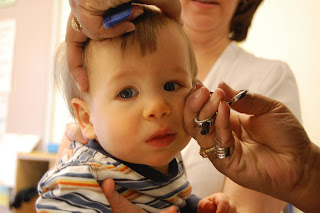 After 11 months of growth Kimberly and I realized that Isaac needed a haircut. While I usually cut the boys hair with clippers, Kimberly was not all that big on that idea. So for weeks we have just let it go, and go, and go. Toddlerâ€™s hair doesnâ€™t tend to grow everywhere, so Isaac was really showing his roots with what can best be described as a mullet. If you are not familiar with this hairstyle, the idea is to look professional and clean cut in the front and wild and crazy in the back.

Anyway, the whole crew ended up at Respite this past Saturday. We had several new families, new volunteers â€“ overall it was a great day. To top it all off there were hair stylists (who specialized in mullets, by the way) there volunteering their time. They offered to cut anyoneâ€™s hair, so we sat Isaac down.

The reason I mentioned this is because Isaacâ€™s first haircut was done in the setting of ministry. We were there to serve the Lord and others; there were others there to serve as well. We had a need met; they had a need met â€“ isnâ€™t this how ministry is supposed to work?

Acts 4:32-35 â€œAll the believers were one in heart and mind. No one claimed that any of his possessions was his own, but they shared everything they had. 33With great power the apostles continued to testify to the resurrection of the Lord Jesus, and much grace was upon them all. 34There were no needy persons among them. For from time to time those who owned lands or houses sold them, brought the money from the sales 35and put it at the apostles’ feet, and it was distributed to anyone as he had need.â€