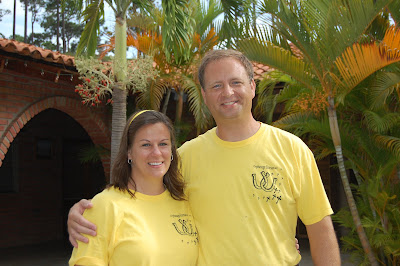 Kimberly went to Orphanage Emmanuel last year and I could tell it really was a meaningful and spiritually revitalizing time in her life. Upon her return she said that I had to go next year and I was very reluctant to say the least. I did not want to take away from her experience but I had no desire to go â€“ I was dealing with comments in my mind like, â€œit just about broke us to pay for her trip, how could we both go?â€ and â€œHow would we take care of the kids?â€ and on top of all that I knew that if I went, I would probably be â€œhookedâ€ too.

The last thing I wanted was to fall in love with hundreds of children, and then have to leave them. So I stuffed the thoughts deep in my brain, and Kimberly started praying. Well a year rolled around, Kimberly started raising money so she (we) could go and sure enough, she raised her amount so that it didnâ€™t break us for her to go again.

Then the dreaded phone call came â€“ the pastor who had planned to go had backed out for personal reasons and all eyes seemed to roll on to me. I said, â€œI couldnâ€™t get my passport soon enough (I did). I couldnâ€™t afford to go (turns out it was already paid for.) Great, they needed a pastor, it was paid for, and Kimberlyâ€™s prayers had been answered.

So I went, and the trip was amazing. I had never traveled over-seas, so I was introduced to the Honduran poverty and corruption, but far more importantly I was introduced to a ministry that is truly making a difference in the lives of hundreds of children and has done so for over twenty years.

I could have â€œknuckled-downâ€ and refused to go, but that would have been going against all the evidence that God had worked it out for me to go (in spite of me). I also, would have missed a spiritually rejuvenating experience that comes once every decade or so. God wanted me to â€œgo,â€ because he was going to use me to minister in His name, and he wanted to move in my heart; to change a piece that was beginning to grow cold and hard.

After over a decade of pastoring God in mercy would not let me become bitter, hardened, cold, and sarcastic. He renewed my hope (not in Him, for He is always faithful) in myself. When the world falls down around us, we begin to feel crushed, that is when God reaches down and pulls us from the rubble and says, letâ€™s build. And he begins the building process in our hearts. If this is how you feel, then look around; there is more than likely someone praying for you, and His hand may be reaching out to you. I am thankful for the gifts of God, my wife and His providence.