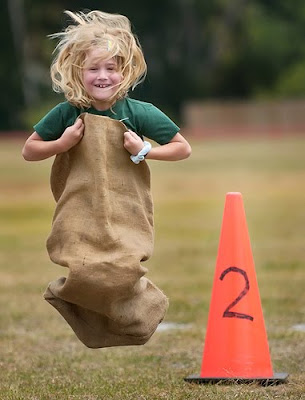 Yesterday was Field of Day at Brunswick Elementary School and I volunteered as a station leader (the water sponge relay). Kids would line up in groups of three or four and stand behind water buckets as teams. The goal of the game is to take your teamâ€™s sponge (filled with water), run to a cup with a fill line on it, and wring all the water out of the sponge and run back. The team who filled their cup first won the game. Seeing kids do this for over two hours I noticed that in many ways this was a metaphor for life. So here are some â€œreal lifeâ€ observations.

1. Make every drop count. Many of the kids would loose most of the water in their sponge before they got there, or when they squeezed the sponge, they completely missed the cup altogether.

â€¢ In life we get so caught up in the game, running the race, that we lose focus of what life is really about. In the game ultimately nothing matters if the water is not in the cup. We work so hard, but if Christ is not the primary focus and source of strength, then itâ€™s like running through life with an empty sponge â€“ we are just going through worthless motions.

2. Take the hand off seriously. Many of the boys about half-way on their return run would throw the sponge to the next team mate. It would inevitably go flying off in a wrong direction and the second runner would have to go run after it, wasting precious time.

â€¢ How we relate to other people is so important. People are important. We tend to take people, relationships, and time with those people for granted. When we fail in our relationship â€œhand offsâ€ become difficult and so much time is wasted. How many years are wasted when dads take their children for granted, and when he finally reaches out to them they resist and are â€œbusy.â€ How many hand offs are fumbled because somebody thinks its funny to play around with other people.

3. Donâ€™t take too long wringing the water out. Squeezing the water out of the sponge over the cup is a critical part of the game, but several students would stand over the cup and wring with all their might, and continue to do so, even when the pay off is a single drop of water. Other students could have returned with a full sponge of water.

â€¢ Wringing too long deals with obsessing. Do you tend to dwell too long on something even when it is obvious to others that it is time to move on? Do you have to always be right? There is a point in making decisions when to stay with something is no longer worth the pay off.

â€¢ Also, the student who squeezes too long doesnâ€™t realize that there are other people on the team who can come after them with a full sponge of water. It is ok to let someone else to be next on the team. Run back to the line and quit working so hard. Trust your team.

â€¢ I saw both of the students when they kicked over the cups, but you know what I noticed? The team didnâ€™t get upset, they were content to put the cup back upright and keep playing the game. They knew they wouldnâ€™t win, but they didnâ€™t seem to care. When we kick the cup over in life, itâ€™s because we have allowed our lives to get out of balance. We focus on one thing too long and with too much energy so that we are not aware of what the rest of our body is doing. Do you have systems, alarms, or people that will let you know if you are beginning to obsess?

5. Have fun! Life is not always about winning. You have friends on your team, play the game and have fun.

â€¢ The weather was beautiful on Field Day; the kids were excited to be outside and to play the games. The teachers were joyful to be outside with their students, and the parents enjoyed helping the school. Life has itsâ€™ difficulties and rainy days, but when the sun shines and the people are in your life whom you love â€“ then smile, enjoy the sun, and play the game.