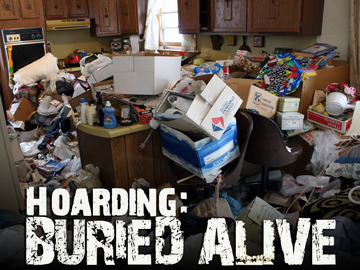 Oprah, A&E, TLC, and various web sites have caught America’s attention with the compulsive disorder of hoarding. Various sources try to attribute the condition as an inherited disease, damaged parts of the brain, emotional damage, etc. but the end result is the same â€“ people collect so much stuff into their homes that they are literally buried alive.

Katherine Harmon of Scientific America said, “those with the disorder ‘are frequently characterized by poor insight about the severity of their condition, leading to resistance of attempts by others to intervene.’ And as the Mayo Clinic notes, even if hoardersâ€™ collections are disassembled, they often begin acquiring more items right away because their underlying condition has not been addressed.” [1]Â

They stop seeing how the trash begins to decompose, or the smell from dead animals or excrement has increased in the home, or how they are slowly losing whole parts of their homes to piles of stuff (kitchens, bedrooms, bathrooms etc).â€” when asked to make a decision regarding one piece of the pile it becomes stressful and they become anxious.

Eventually family members, adult children, landlords, or someone will draw attention to the unsanitary and unsafe living conditions of the home and they are forced to do something about their situation.

So what does this have to do with leadership? Well, do you have an issue that you have not dealt with? The issue keeps coming back again and again? Issues with the sound system, lack of signage, lack of adequate parking, rude people in your organization, etc. Instead of fixing the problem you instead keep putting it off. You may have even tried to resolve the issue to no avail, and now you have simply quit trying. In your mind you have resolved that it will never change and there is nothing that you can do about. So on the pile the issues go, one upon another. Until, before you know it, you have hoarded “issues.”

1. Invite a Friend Into Your Home.

Hoarders hate for people to come into their home. They are embarrassed about other people seeing it.Â All of those piles they have stopped seeing and dealing with get brought to the surface. If the person you ask to come over for a visit is honest then they will be able to tell you what areas of your organizations need to be â€œcleaned up.â€

But honestly, you probably already know what needs to be done, and you have simply stopped trying to fix it. Knowing that your friend is coming will energize you to finally fix it after all.

Hoarders feel overwhelmed with the mountain of work and often are paralyzed with anxiety of not knowing where to start. So, the professional organizers start with a room, empty it out completely into the yard, organizes the stuff (things to keep, things to throw away, and things to sell), and then they organize and plan the room as it should be.

So pick an area that needs to organized, break it down to its simplest parts, and rebuild it as it should be. Donâ€™t try to fix everything all at one time. This will stress you and the people who are helping you. Instead pick the most glaring problem and deal with it. Most issues that have been put off cannot be dealt with in one meeting or in a week. So put in on a dry erase board in your office, schedule a follow up meeting, or ask someone to hold you accountable on the issue — Just keep it in front of you until it is dealt with. Don’t allow it to go back onto the pile of other issues you haven’t dealt with yet.

3.Â  Be Smart About Your Emotions.

With most hoarders there is an emotional trigger. It could be the death of a loved on, the loss of a job, abuse of some kind, or depression, but usually something happened to trigger the hoarding behavior.

What happened in your leadership that may have caused you to stop trying to deal with certain issues? Go back and deal with the emotional issue, then go on to fix the existing issue. Did someone push back when you tried something new? Is there someone who embarrassed you in a staff meeting or church business meeting or someone made you feel that you were of little value to the organization, then you unconsciously decided just to quit trying. Whatever it may be, we are called to do our best for the Lord. We are not just to get by with mediocre quality in our organizations. There is a reason why you stopped working on specific issues. Â Make sure that you are not mad at someone, have given up out of frustration, or simply quit caring.

4. Understand the Consequences of Not Cleaning Up.

What drives many hoarders to clean up their homes is the fact that if they donâ€™t they will lose their homes, apartments because of the unsanitary condition. While this is tragic, in church life if we ignore certain issues (especially if they are easily fixable) then people will not return after an initial visit. If the nursery is not painted, greeters are rude (or even worse no one speaks to them at all), they get lost on your campus, or something along these lines then there is an opportunity lost to share the gospel and influence their family for Christ.

Romans 8:37-39 â€œNo, in all these things we are more than conquerors through him who loved us.Â For I am sure that neither death nor life, nor angels nor rulers, nor things present nor things to come, nor powers,Â nor height nor depth, nor anything else in all creation, will be able to separate us from the love of God in Christ Jesus our Lord.â€