In Luke 15 we see the story of the prodigal son. The boy went to his father and demanded his inheritance, even though his father was still alive (which was a great insult, and potentially hard on the family financially). But the father gives the boy his inheritance and the boy leaves home, travels far away and absolutely wastes the money. Eventually he runs out of money, finds a job taking care of pigs, and is so hungry he wants to eat the slop the pigs are eating. He comes to his senses and decides to ask his father back home if he can work on the family farm as a servant.

Luke 15:20 “But while he was still a long way off, his father saw him and felt compassion, and ran and embraced him and kissed him. 21 And the son said to him, ‘Father, I have sinned against heaven and before you. I am no longer worthy to be called your son.’3 22 But the father said to his servants,4 ‘Bring quickly the best robe, and put it on him, and put a ring on his hand, and shoes on his feet. 23 And bring the fattened calf and kill it, and let us eat and celebrate. 24 For this my son was dead, and is alive again; he was lost, and is found.’ And they began to celebrate.”

We know that the prodigal son was not physically dead while in the far country, or physically made live when he returned home. The prodigal son was dead because he was away from home, out of touch and out of communion with the father. He is dead in his trespasses and sin against his father. 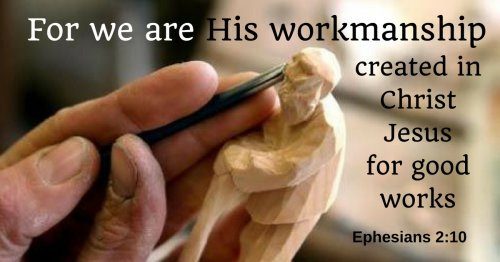 And you were dead in the trespasses and sins 2 in which you once walked, following the course of this world, following the prince of the power of the air, the spirit that is now at work in the sons of disobedience— 3 among whom we all once lived in the passions of our flesh, carrying out the desires of the body and the mind, and were by nature children of wrath, like the rest of mankind.

Paul begins our chapter by reminding us of our past. “Scripture uses many metaphors to describe man’s sinful state, such as blindness, deafness, fever, paralysis, leprosy, etc. but not one more forceful in meaning than this one of being dead in sins.”[1]

We are “dead in the trespasses and sins,” – to trespass is a violation of a definitive law, and to sin is to miss the mark (like an archer aiming at a target). We are guilty on both accounts. It is as if there is a giant “no trespassing sign” and we willfully went past it.

And no one will deny that there are degrees of sin. If we compare Hitler who oversaw the killing of millions of Jewish people, and someone who stole a package of gummies at a gas station – are they the same? Both are sin.

If we look at Mark 5:21ff. we see Jairus’ daughter, and by the time Jesus got to her she had only been dead for a very short period of time, yet dead still. And later when we see Jesus coming to Lazarus’s tomb (John 11) – he intentionally stayed away for days, and when it was time to roll away the stone at the entrance when “Jesus said, “Take away the stone.” Martha, the sister of the dead man, said to him, “Lord, by this time there will be an odor, for he has been dead four days.”[3]

Both Jarius’ daughter and Lazarus are in different stages of corruption, yet they both are dead. You may not be Hitler, but we are all sinners by our nature, Romans 3:23 “. . . for all have sinned and fall short of the glory of God,”

Man’s common state of sin is like people trying to jump across the Grand Cannon (4 to 18mi.). 10 year old (8 feet), 20 year old Olympic long jump (30 feet), 50 year running from the IRS (50 feet) – all will fall short. We are all, “Sons of disobedience and children of wrath” are parallel verses, meaning the same thing.

(v. 2) “in which you once walked,” – The word walk is often used in the New Testament to describe a way of life. The words transgressions and sin describe the path in which people walk and the boundaries that shape their lives.[4]

Because we were spiritually dead, by nature (v. 3) “in the passions of our flesh, carrying out the desires of the body and the mind” – it is our nature as human beings to live this way, and which always results in God’s Wrath. Romans 6:23, “For the wages of sin is death, but the free gift of God is eternal life in Christ Jesus our Lord.”

In the gospel of Matthew 11:16-19 we see “But to what shall I compare this generation? It is like children sitting in the marketplaces and calling to their playmates, 17 “‘We played the flute for you, and you did not dance; we sang a dirge, and you did not mourn.’ 18 For John came neither eating nor drinking, and they say, ‘He has a demon.’ 19 The Son of Man came eating and drinking, and they say, ‘Look at him! A glutton and a drunkard, a friend of tax collectors and sinners!’ Yet wisdom is justified by her deeds.” John the Baptist and Jesus were both preachers, John’s message was focused on repentance and judgement (like a funeral dirge), and Jesus’ sermons he compares to a flute at a party (good news, joyful) – but the people did not respond to either.

But in the heart of some, there is a quickening.

The Holy Spirit draws some toward Jesus.

4 But God, being rich in mercy, because of the great love with which he loved us, 5 even when we were dead in our trespasses, made us alive together with Christ—by grace you have been saved— 6 and raised us up with him and seated us with him in the heavenly places in Christ Jesus,

(v. 4) “But God,” – dead people can’t do anything. They can’t breathe, they can’t heal, they can’t take action to please God – all they can do it decay. And since they can do nothing to improve their situation, God chose to do something to make our relationship with Him right again. He made the first move.

“being rich in mercy, because of the great love with which he loved us” – “There is an infinite resources of mercy for the vilest sinner. There is no one for whom there is no mercy” or where the mercy will run out.[5] Not just a little bit of mercy, God is rich in His mercy toward sinners.

God saw our condition of sin and spiritual death, and out of compassion and love for His creation He took action, “made us alive together with Christ Jesus.”

Jesus’ death on a cross and his resurrection from the dead is a picture and a promise of us being made alive with Jesus. “There was a time when because of my sins Jesus Christ lay dead in the grave, but having completed the work that saves, God quickened Him from the dead and brought Him back in triumph from the tomb.”[6] We believe in Him and are brought forth from the place of the dead and are brought back to life.

“by grace you have been saved” – grace is God’s action toward us when we do not deserve His favor.

7 so that in the coming ages he might show the immeasurable riches of his grace in kindness toward us in Christ Jesus. 8 For by grace you have been saved through faith. And this is not your own doing; it is the gift of God, 9 not a result of works, so that no one may boast. 10 For we are his workmanship, created in Christ Jesus for good works, which God prepared beforehand, that we should walk in them.

God loves his creation so much that He sent His Son into the world to be a propitiation for our sins, but He loves His Son so much that he will not permit anyone into heaven who ignores the work of the Lord Jesus Christ accomplished.”[9]

When a person chokes or drowns and stops breathing, there is nothing he can do.  If he ever breathes again it will be because someone else starts him breathing. A person who is spiritually dead cannot even make a decision of faith unless God breathes into him the breath of spiritual life.  Faith is simply breathing the breath that God’s grace supplies.[10]

Every person lives by faith.  When we open a can of food or drink a glass of water we trust that it is not contaminated.  When we go across a bridge we trust it to support us.  When we put our money in the bank we trust that it will be there when we go to withdraw it.  Life is a constant series of acts of faith.

Human effort has nothing to do with it.  And thus, no one should boast, as if he had any part of it.  All boasting is eliminated in salvation. When we see each other in eternity, we will know that none of us deserve to be there and will bow before Jesus in his glory and grace.

(v. 10) “created in Christ Jesus for good works” Not in order to be saved but because we are already saved are we to do good works. As the sun was created to shine, the rose to give forth its delightful fragrance, the bird to fly, so we are created anew to do good works and thus to glorify him who created us as what we are in Christ Jesus.”[11]

(v. 10) “which God prepared beforehand, that we should walk in them.”[12] – “What Paul says is not that God prepared us that we should walk in good works (so Luther), but that he prepared the good works.”[13] The believer is saved, but then we don’t look around for just something good to do, God lays out the journey before us. Our job is to stay close to God and His Word, so that “Your word is a lamp to my feet and a light to my path.”

John 3:16 “For God so loved the world, that he gave his only Son, that whoever believes in him should not perish but have eternal life.” God gave His best so that we may have eternal life – have you received Jesus’ free gift of salvation and new life?

[7] Seated is given in the past tense (aorist tense) indicating it being so definite that it is as if it has already fully taken place. MacArthur, 60.

[11] R. C. H. Lenski, The Interpretation of St. Paul’s Epistle to the Galatians to the Ephesians and to the Philippians (Minneapolis, Minnesota; Augsburg Publishing House, 1961) 427.

[12] “C. L. Mitton concludes his discussion on this verse with an appropriate comment: “This final phrase about our ‘walking in them’ reminds us that fine phrases or eloquent sermons about love are not what is required, but the actions, costly actions, which express in practical conduct the love which God’s saving power has created in our hearts.” David J. Williams, New International Biblical Commentary, Ephesians, Colossians, Philemon (Peabody, Massachusetts; Hendrickson Publishers, 1990) 186.