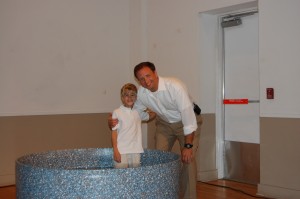 Does it really matter if one is immersed, sprinkled, washed, effusion (pouring), etc.? These are referred to as the modes of baptism. Â The word given in the Bible for baptism is the Greek baptizo, which means â€œto dip under repeatedly, to immerse, to submerge.â€[1] To immerse is the primary meaning of the Greek word baptizo.Â  Also, the other referenced modes of baptism mentioned had Greek words to reference them (sprinkling; rantidzo, pouring; epicheo and prochusis) but they were never used in discussion of baptism (only baptizo).

Immersion best pictures the significance of baptism, which is death to the old life and resurrection to the new (Romans 6:1-4). Immersion was the universal practice of the early church and every instance in the New Testament either demands or permits it.

There are also extra-biblical references to baptism that are helpful in determining the proper mode of baptism. In the Didache (an early form of catechism around AD 100) it says,

â€œAnd concerning baptism, baptize this way: having first said all these things, baptize into the name of the Father, and of the Son, and of the Holy Spirit, in living water. But if you have no living water, baptize into other water; and if you cannot do so in cold water, do so in warm. But if you have neither, pour out water three times upon the head into the name of Father, and Son and Holy Spirit. But before the baptism let the baptizer fast, and the baptized, and whoever else can; but you shall order the baptized to fast one or two days before.â€[2]

From this text one can gather that early believers expected baptism, and it was preferably by immersion. However, we can also see how the early church began to add to the canon of Scripture (i.e. fasting before baptism as a requirement, baptism in living water, cold water, etc.).

There are secondary modes, referenced by other early extra-biblical sources, used (such as pouring) but were used only when immersion was not possible. In such cases, such as sick people, pouring was called â€œclinical baptism.â€ Baptism in not part of a believer obtaining salvation or the forgiveness of sin, that only comes through faith in Christ and His death on the cross.

Baptism follows oneâ€™s acceptance of Christâ€™s gift of salvation as an outward act of obedience to what has transpired inside his soul. So the order of importance to the subject of baptism is (1) saving genuine faith in Christ alone for salvation (2) a proper understanding of the symbolic meaning of baptism and a profession of Christ (3) baptism (4) mode of baptism â€“ preferably by immersion (5) membership into a local church.

When is a Child Ready for Baptism? 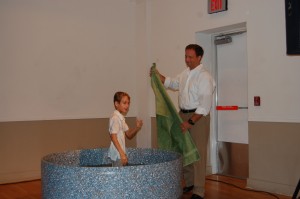 In the eleventh chapter of second Samuel is the story of David and how he has fathered a child with Bathsheba, and killed her husband. Because of this sin, God tells David through the prophet Samuel that He is going to take the child.

David then begins to pray and fast in hopes of changing the Lordâ€™s mind, but eventually the child dies, and he responds to the servants concern about his drastic change in behavior from mourning to normalcy by saying in verse twenty-three, â€œBut now he is dead. Why should I fast? Can I bring him back again? I shall go to him, but he will not return to me.â€ David is stating here that small children who are too young to make professions of faith or have the cognitive ability to understand their depravity and receive the gospel go to heaven. He says that he will one day â€œgo to him.â€

The child was too young to make a decision of faith in God, and yet as a son of Adam he was â€œborn in sin.â€[3] So he has the inherited sin nature from Adam, and did not express his faith in a coming Messiah. Yet, David says that he will see his son again. So Baptists have explained this passage as there is an â€œage of accountability,â€ where children develop cognitively, emotionally, and physically to such a point that they are able to understand their own sin, their lostness, and the gospel. Davidâ€™s son was shown grace from God that we are not fully able to explain this side of heaven. So a child is ready for baptism once they understand these things, have genuinely received Christ as their Savior, and then follow of their own volition the teaching of Christ to be baptized. 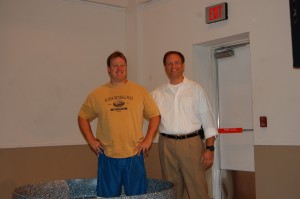 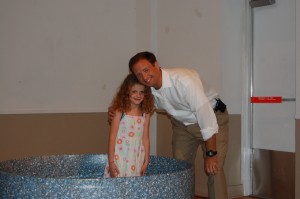