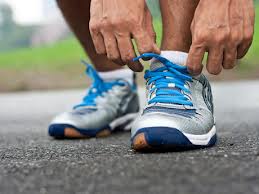 A goal began to develop in my mind last year when my wife and I went to a Children’s Ministry conference in Orlando, FL. We noticed that there were many people wearing medals from running in a marathon, and half-marathon. I began to think of all my attempts to get into shape and how they had slumped off after six to eight weeks of going to the gym. Something had always come up that broke my workout routine and it would be months before I would go back, where I would essentially start over. I realized that I needed a goal, something to work towards. My plan was finalized when at Centri-kid camp where I had forgotten something in my room and had to “run” back and get it. When I had run approximately 100 yards and was very winded, I thought, “I have got to get back into shape.”

So, I have a goal of running a half-marathon in January at Disney in Orlando, Florida. I have been training over seventeen weeks and feel pretty confident that I will at least finish the race. In the last couple of months as my runs have gotten progressively longer my feet have begun to hurt so that I am hobbling around bent over in pain. My last long run was over a week ago and as I sit here writing my feet are throbbing. The condition is called Plantar Facetious (for more information go to http://www.ncbi.nlm.nih.gov/pubmedhealth/PMH0004438/).

So let me tell you about my â€œbig ideaâ€ that I had over six months ago. The plan is to take the whole family down on Friday afternoon to Disney. Spend the night at Animal Kingdom Resort Hotel. I will get up and run the race early in the morning, then come back to the room, clean up, rest some, then afterwards hit Animal Kingdom at Disney when it opens, and then at some point in the evening drive back home. Sounds awesome, right?

We have already paid for the race, the hotel room, and will buy park tickets upon our arrival. I know it sounds exhausting, but I think this is a great way to get the whole family to be apart of the race, to go to Disney, and be able to do it with one nights stay. Christmas presents this year even revolved around this trip to Disney. But there is a looming issue of me not being able to walk after a long run (sometimes even for days afterward).

So, after some research (on Google of course) and being about two weeks from the race, I am going to try taping my feet before a long run. (There are some great youtube videos discussing the topic of taping). http://www.youtube.com/watch?v=5Z2XlqsuQSY

This seems to be the cheapest alternative, especially in light of limited time to solve this problem. My way of solving the problem so far has been not run, or to run shorter distances. This option does not help me to remain conditioned to where I need to be for the half-marathon. So Iâ€™m planning to try taping tomorrow for a long run (10 miles or so).

In leadership (and life) there will be some big goals or projects that you may attempt. If you are not attempting big things or big goals then you are not leading; you are maintaining. Leadership does involve maintenance and stability, but for the ultimate objective of moving the organization forward toward its purpose. Â If there are no goals, or mountains to be climbed then work tends to be easily broken off by daily immediate concerns, and the organization can get derailed from its ultimate purpose. So, set some big goals, when problems arrive keep working at solutions until you have an answer, and finish the race.

To read the second part of this article click here.