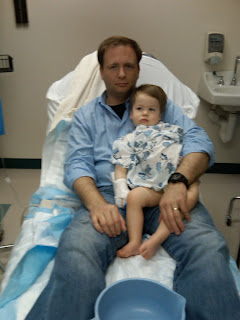 Kimberly dropped this kids off at church this morning and took Isaac to the Emergency Room. As a I was finishing up all the after-the-service stuff that we have to do because we rent our facility, I called Kimberly. She was still sitting in the waiting room. Our friend and neighbor Guin offered to take Hannah-Grace home with her and I had two car seats in my car. I then had to rush home because Kimberly had set up a Craigâ€™s list sale â€“ with a lady coming somewhere from West Virginia. I sold our â€œgoodsâ€ and was waiting for Kimberly to come home but as the afternoon dragged on, she never did.

As we talked back and forth over the afternoon the doctors wanted to keep him there and watch him â€“ rotovirus. Our same friend Guin and eventually another friend Kristy came over and watched the kids so I could go and see that was going on. Long-story-short and after two ivs and many many many diapers (did I say a lot) â€“ we changed diapers one after the other for hours, they admitted Isaac to the hospital to stay the night.

So I just came home, and will get the kids on the bus in the morning and head back with a change of clothes for Kimberly and Isaac, and prayfully they will be coming home with me.

Please pray for Isaac. Our concerns are not dehydration (he is on an iv) and he is not throwing up, but he canâ€™t stop the explosions in his diapers. I donâ€™t want to gross you out â€“ but if I didnâ€™t know the difference, and had not seen it with my own eyes, I would have thought that he urinated in the diapers and not the other.