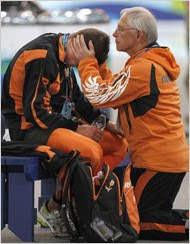 Speed skater Sven Kramer was disqualified for an illegal lane change in the Winter Olympics yesterday. As the skater was competing in the event, his coach yelled out that he needed to change lanes, that the speeder had made a mistake. Because the skater followed his coach’s instructions he was disqualified. In response Kramer said,

“Usually, I don’t want to blame anyone else, I take responsibility as the skater on the ice. But this time I can’t do anything else,” the son of two-time Olympic speed skater Yep Kramer told reporters after the race.”

“I wanted to go on the outer lane, then just before the cone Gerard shouted, ‘Inner lane!’ I thought he was probably right. At first I thought my skates passed the cone on the wrong side, and I will be disqualified. Then I noticed in the stadium, something was wrong.” (cnn.com 2-24-10)

If you think of all the hours of practicing, untold amounts of money spent and sacrifices by the boy’s family, and his dreams that melted before him, it is really sad. He lost because he took the advice of someone he trusted (his coach).

My first response is to blast the coach; he made a monumental mistake. But truth be told, those in leadership make mistakes. But if you watch the video the coach’s heart is to see his skater win — he truly believes that the boy has made a mistake and he is doing all he can to make the (false) correction. The coach acted in good faith. If there is a charge to be made, it is one of incompetence. But he is an Olympic coach — he was doing something right to get the boy to “the show.” Men make mistakes.

You could also, put fault at the skaterâ€™s feet. He had been trained and had prepared for thousands of hour — this was his event after all. He was the one racing, and he was the one who would win the metal. Players have a responsibility to pay attention and cautiously evaluate everything they are told (even by their coaches).

In the book of Acts we see the early church receiving spiritual coaches and listening to what they say, while at the same time comparing what they say to the ultimate authority, the Bible.

Acts 17:10 says “The brothers immediately sent Paul and Silas away by night to Berea, and when they arrived they went into the Jewish synagogue. 11 Now these Jews were more noble than those in Thessalonica; they received the word with all eagerness, examining the Scriptures daily to see if these things were so.â€ (ESV)

So in life, whether you are a player or a coach, if you line up what you say, and how you respond to the ultimate authority (the Scriptures) you will avoid wrong lane changes, loss of metals, or things that are of far more eternal value. But in the end we all will make mistakes, and the Bible was written for those who are human.