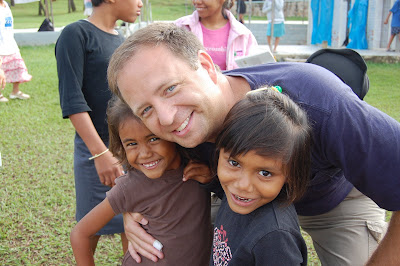 I have had several people ask me about Kimberly and my recent mission trip to Honduras. I had intended to journal while I was there but due to poor internet connection and a busy schedule I was unable to do so. And to be honest the experience was so emotionally overwhelming that my entries would have been trite and dishonest (only because I would be writing something just to get something out). I was asked by others on the team what I thought about the experience while we were on the field and I honestly could not adequately explain in a few words the emotions and feeling I was experiencing. I really canâ€™t describe (this coming from a person who communicates for a living) what it was like, but I can put the feelings into the form of a few stories. So the next series of entries will be me trying to share a life changing experience with you.

I will begin by telling you of my experience of the toddler house. The children at Orphanage Emmanuel are divided into age groups and gender, but the youngest children have the boys and girls together, where they live in age graded housing. Kimberly and I on this particular morning were serving in the clinic (due to an outbreak of chicken pox) and because of fever and diarrhea the clinic was running low on diapers. So I was sent to the Toddler House to get some more and bring them back to the clinic.

As I approached the Toddler House I was first amazed at how orderly and clean everything was. All of the clothes were folded and sorted by color, and then stacked into cabinets. There were about six older girls from the orphanage who were helping a staff member. I approached the woman in charge of the home and explained why I was there and she began to talk with the other girls about where to get the diapers, and was giving them instructions. It was at this time when the children there became aware of my presence.

They all began to rush me, hugging my leg, pulling on my hands, pulling on shirt, and all speaking Spanish. I couldnâ€™t understand their words but I understood their hearts. These children wanted me to hold them, hug them, touch them, just love them. I began to think about my three year old son Isaac. What if he were here, and had no mother, no father, no one to tell him how wonderful he is.

It was as if the air around me began to get thick, and I felt my heart in my throat. As they were pulling me I began to weep. All of these children, and all they want is someone to hug them, smile at them, hold their hand, and tell them that they are loved. The staff love them, but they are only a hand full in comparison to 415 orphans, and their focus is on clothing, preparing meals, organizing their day, etc. . . They need volunteer teams to come in and to love the children. So, my job for 10 days was to simply love children.

The first thing that I came to realize was that I went to Honduras to simply love, hug, smile at, and hold hands with children. My background is that of an organizer and â€œfixer.â€ I work at the executive level of a church — I put out fires, and deal with problems. In Honduras there was nothing for me to â€œdoâ€ but love children. This filled my heart with joy like nothing I have done in a long time. We make life so complicated, there it became very clear and uncomplicated. God said to me, â€œDrew, just love the children.â€ Even now this brings tears to my eyes. Just love the children.